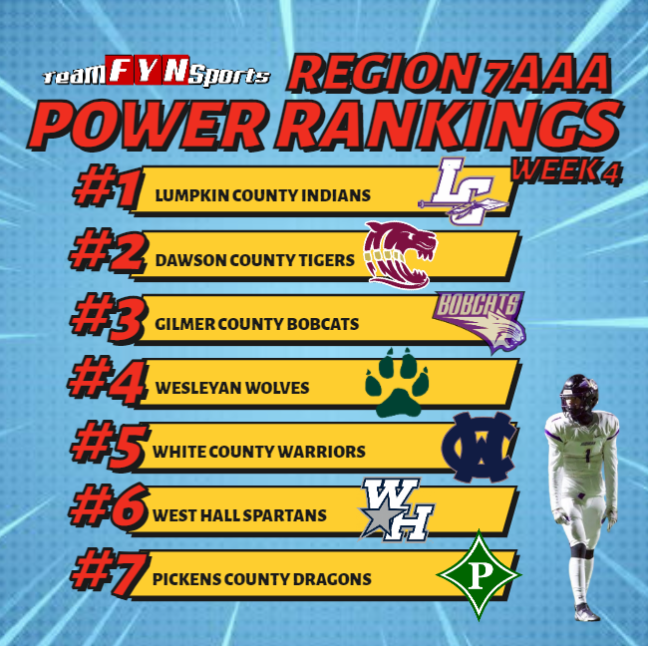 What a great first few weeks it has been in Region 7AAA.

It seems like there’s more parity between the teams this year than there has been in recent memory, and a lot of that has to do with the success of the Lumpkin Indians and the Gilmer Bobcats. Two teams that have been at the bottom of the barrel for the previous few years have now emerged as potential playoff favorites, and they’ve proven week in and week out that their success is no fluke.

Gilmer started off the year with wins over LFO, back-to-back Region 7aa Champ Fannin County, and a 36-0 shutout of Murray County before falling to Ringgold on the road last week.

Lumpkin is the lone undefeated team in the Region as they’ve torn through their first 4 opponents, outscoring them 164-33. Their most impressive win thus far came last week against a good Temple team in which the Indians held the Tigers scoreless in the second half.

The 7AAA team with the toughest schedule thus far has without a doubt been Sid Maxwell’s Dawson County Tigers. The Tigers opened up their season with a home win over 6A Jackson County, a loss on the road to 7A Lambert, a road win over 4A North Hall, and a home loss to powerhouse Stephens County. The Tigers might enter Region play with a 2-2 record, but they will also enter Region play as one of the most battle-tested teams in all of AAA football, which will bode well for them down the road. 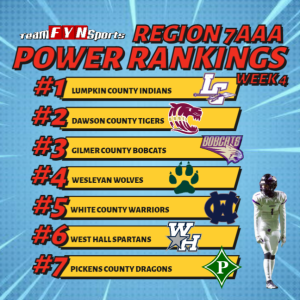 4-0. That’s all there is to it. They’ve looked great on both sides of the football and new Head Coach Heath Webb seems to have a great game plan for his Indians this year. They deserve to be at the top until someone knocks them off.

Dawson has held their own against some tough opponents this year, and with Coach Maxwell at the helm they’re always going to be at the top of their Region.

Gilmer has shocked quite a few people on their way to a 3-1 record. Their signature win thus far has come against a Fannin County team that just picked up their first win in week 3 vs Pickens. Time will tell if the Bobcats blue collar, ground and pound offense can lead them to a playoff spot.

Wesleyan has stumbled out of the gate this year and find themselves at 1-3 on the year. They’ve played some stout competition up and to this point, but Region play will be the tell if the jump from A to AAA is to much for the Wolves to overcome in 1 year.

A lot has changed in White County in the past year. 1st year Coach Chad Bennett had a lot of holes to fill on this team heading into the ’22 season, and so far it looks like his players are responding well. The Warriors are 2-1, and with their only loss coming in a game where they put up 28 points against 6A Habersham Central, I’d say things are looking better than expected in White County.

Perhaps the biggest disappointment in 7AAA so far this year, Pickens has yet to find their identity on the football field. They showed promise offensively in their game against North Murray where they were able to light up the scoreboard for 50 points, but then followed that up with a performance against Fannin County where they only found the endzone in garbage time.